What to do in Surinami?

From the wonderful markets of Paramaribo to the isolated jungles at Palumeu, you will be blown away by everything Suriname had to offer. This country is a true melting pot of cultures.

Walk around the capital city - Paramaribo

If you merge the American Wild West with Amsterdam, you’d get Paramaribo. It's definitely one of the most interesting capital cities in the Guiana region. Wander around the UNESCO World Heritage town, and find green squares lined with black and white Dutch colonial houses, have lunch at one of the many Indian roti shops, or visit artwork market of Maroon artists selling their craft outside the old Dutch forts.

In this multi-ethnic city, even synagogues and mosques are next to each other.

Central Suriname nature reserve covers the largest part of the whole country. It holds 40% of the unique Guianas fauna and animals.

One of the things you must visit while in a reserve is the Raleigh Vallenn waterfall. The falls run from the Coppename River in a long and low flow. While refreshing in the waterfall you can also spot the spider monkeys, electric eels and many unique and exotic birds.

Go for a walk on the banks of Commewijne River and through the plantations for a raft of colonial museums, lush green parks, and great restaurants for lunch. Water taxis are one the easiest way to travel the river and its banks, although you can explore it on a rental bikes.

If lucky you might even spot a dolphin in the river's waters.

This one is pretty great. Located in the heart of the city it sells fish, meats, vegetables, and fruits, just like any other market on the ground floor and clothes on second. But this market also has a more intrigued section known as “Witches Market,” or Maroon Market. Here you can buy shells, bones, herbs, and many mystery brews.

Get in touch with nature at Brownsberg Nature Park, home to over 1,450 plants and 350 species of birds.

Used to be a goldmine in the 19th century, now this area is a natural protected reserve since the late 1960s.

You must climb to the top of the park's 500m plateau for a breathtaking view of the nearby lake and landscape.

Howler Monkey Island is named, because of the colony of howler monkeys that live there. Also on the island, you can see a massive yellow-foot tortoise. From there the treks into the jungle also can also be arranged.

It is the largest Hindu temple in Suriname. Because of the large population of Hindus in the country. The temple has many unique design elements and symbolism featured in its structure.

It’s very small, but it’s an amazing way to spend a day. From the gorgeous, sandy beaches where you can pick mangoes right off the trees to the picturesque downtown area, Galibi is peaceful and calm.

You must try smoked catfish, which is a local specialty and is very delicious. 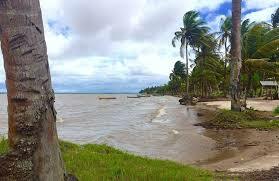 Visit this marvelous nature park while in Suriname to see many various animal species. It is a wonderful spot to see the turtles during the laying season from April to August. Exotic bird watching is another fun thing to indulge in at the Galibi park.

The biggest Mosque in the Caribbean region is Mosque Keizerstraat, located in Paramaribo. It is a wonderful building with beautiful gardens around it.

It took 20 years to complete it as it was built mainly with hands. Also, it’s unique because it is next-door to it is the Nevah Shalom Synagogue.

Built-in the late 19th century it has a sand floor as a symbol of the Hebrews 40 years in the desert. Locals take great pride in the location of these two places of worship and feel it’s a reflection of their multi-ethnicity community.

It’s the biggest wooden structure in the Western Hemisphere and was built in the 19th century.

See other briefs for Suriname

How to get from J.A. Pengel Intl/Zanderij (PBM) to Paramaribo? - Suriname

Waterfalls in Suriname and how to get there? - Suriname

What to eat in Suriname? - Suriname