What to eat in Uruguay?

Uruguayan cuisine has been profoundly inspired by other countries – mostly by Spain, Italy, and Portugal. back in the centuries of colonization, these countries brought their gastronomy with them. As a result, much of the Uruguay typical food is known elsewhere but has developed into something that is uniquely their own.

The chivito is a famous sandwich filled with a range of ingredients so delicious that star chef Anthony Bourdain has named it his favorite sandwich.

The sandwich is filled with meat - slices of churrasco, ham, bacon, tomatoes, lettuce, melted mozzarella, and a topping of fried eggs. The sandwich buns usually are quite large..

It also can be topped with olives, pickles, and cooked onions, while salsa golf.

This traditional barbecue that can be found across South America is a grill over an open fire, and while many people will see lamb, goat, or other meats being used, there is no doubt that in Uruguay, beef is the king of the Asado barbecue.

These events are often shared meals on weekends or special holidays. The people of a local area will come together, with the hosts making the Asado and guests bringing side dishes or salads with them, to prepare for a wonderful social happening.

Lengua a la vinagreta is a cold appetizer that is quite popular in Uruguay. It consists of a boiled ox or beef tongue that is sliced into thin pieces, then marinated in a combination of white wine vinegar, olive oil, garlic, and parsley, served with capers and hard-boiled eggs 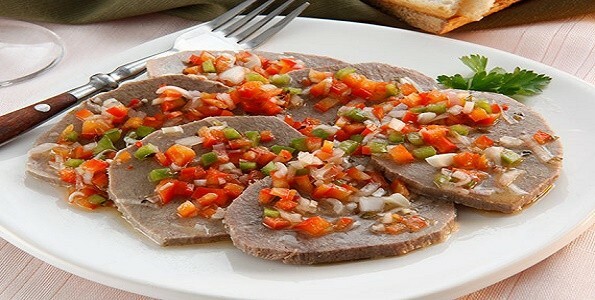 Empanadas are very common in Uruguay as a quick lunch, dinner, or even as an afternoon snack.

They are normally filled with variations of cheeses, with ham, minced meat, onions, chicken, or vegetables.

You can also find sweet pastry empanadas filled with quince jam or dulce de leche. Usually, empanadas are baked in a big pizza-style oven or deep-fried.

In Uruguay, the meal has been modified so that the polenta is actually the central ingredient not only the side dish.

This is a traditional and cheap dish, and the polenta is served with a sauce, usually similar to the sauces served with pasta, and with melted cheese.

Choripán is the most famous Argentine street food, that has made it into Uruguayan streets. it is a sandwich with chorizo sausage and a variety of spices in a crusty bun. You can find it in most street stands throughout Latin America.

Tortas fritas are fried bread influenced from Argentina consisting of flour, butter, lard, milk, and baking powder. The dish is traditionally eaten with a cup of yerba mate. It is commonly served with fruit jams or dulce de leche on the side.

In Uruguay classic pizza is called pizzetas and is only found in pizza restaurants.

The authentic Uruguayan pizza is square and sold by the meter.

There are three types of pizza:

‘just pizza, is tomato sauce with no cheese,

‘mozzarella’ is the cheese one, and a

‘figazza‘ is a very tasty onion pizza with no tomato sauce nor cheese.

You can add whatever toppings you want to these too.

Uruguayans never order pizza without getting a side of faina. This local treat is a fried flatbread made with chickpea flour that you can eat by itself or on top of your pizza. It is outstanding with white pepper on top.

See other briefs for Uruguay

How to get sim card in Uruguay? - Uruguay

Where to surf in Uruguay? - Uruguay

How to get to Cabo Polonio - Uruguay

What to do in Uruguay? - Uruguay

How to get tourist VAT refunds in Uruguay - Uruguay